To Protect and Serve Themselves

In the 1930s during the depression era, you could define police corruption in major cities like Chicago and even Los Angeles by a good system which was either run by some men at all levels who had their hands in the vice game of prostitution, illegal gambling, bootlegging, or crooked politics. Helping the gangsters or political leaders maintain their power and profits seemed to be the cop's goal. They might make a bust or a raid for the newsreels, but the madams and illegal bootleggers who paid their dues to the top escaped the hard knock of justice. These stories sound glamorous now, but writers like Raymond Chandler living in the depression filled City of Angels would say: that for inspiration he only needed to walk out the door and look around. He saw the city as a haven for dope peddlers, schemers in low places and high, crooked cops, and crooked politicians.


Big cities like these with the help of halfway decent leadership, could reform themselves. But the corruption seemed to never really die. It would go dormant, or at least when it did pop up, honest leadership through the decades could tamp down on it. Responsible leadership knew that bad cops were a reflection on the city, county, and even the state. Our TV shows were like public relation pieces for the police. Bad cops would never really disappear, but some of us who were less militant in our thinking and politics wanted to believe that most police were good and the system worked. Jack Webb produced Dragnet on the radio and TV in 1951 to make police seem more human, and to show  that being a cop wasn't an easy job. In 1955 Los Angeles came up with the motto: "To Protect and Serve" which most police departments would later adopt. Later Webb did an upgrade on the cop life with Adam 12. It was the first cop-on-the-beat show. Webb wanted to prove that the police were competent, and not just coffee and doughnut swallowing characters that weren't very bright. But a cop could be relevant, effective, and worthy of respect.

In the middle of the 60's, the civil rights movement I saw (on TV), the police at least attempting to do their best to live up to that motto. We did have bad police in America who would treat people of color like low-lifes and would touch off the anger of a city like LA as in the Rodney King case. Those 4 cops who beat King with their batons for 15 minutes, were not the Malloy and Reed types I saw on TV, and in the end, had justice served on them.

Something has found its way into our society and the way everyday people interact with the police. Like in the days of segregated Alabama and police chief Bull Conner, blatant racism seems to have seeped deeply into many police departments in America. It's been quiet and very subtle, but has gained a dangerous foothold on how police interact with people of color, and for me, law enforcement and prejudice cannot co-exist. It's becoming the perfect storm for a different type of police corruption that never existed in the 1930s. People with race prejudice views have infiltrated the ranks of the police departments across this country. For awhile they've kept to the shadows with their views. Many police unions which may have started out as organizations to help officers with the internal affairs of being a policeman have gone from pay raises and better working conditions like most labor Unions did, to making them a force to be reckoned with in the public.


Private trainers across the country host seminars, frequently at taxpayer expense, teaching “killology” and pushing the notion that if officers aren’t willing to “snuff out a life” then they should “consider another line of work.” Frey explained that this type of training — which has accompanied the increasing militarization of the police over the last few decades — undermined the community-based policing he wanted the city to adopt after a string of high-profile killings in the region.
But then the police union stepped in. The Police Officers Federation of Minneapolis worked out a deal with a company to offer warrior training. For free. For as long as Frey was mayor. -Melissa Segura, BuzzFeed News Reporter

It's nightmarish not only to see a racist and corrupt cop like Derek Chauvin literally
execute George Floyd in public while people looked on, but when the country rose up and decried the act with protests, they were met with a wave of resistance from more police and from the hive of unions who went on the offensive. Now it has become a crime to utter the phrase "Black Lives Matter." If the phrase walking, talking, or standing while black, had been a metaphor, it has become the new reality in 2020. Like you, I've seen on social media countless unedited videos of cops attacking protestors with pepper spray, swinging billy clubs, beating jaywalkers, and other acts that are a far cry from protect and serve. They have been reschooled by the unions and union leaders like Bob Kroll to believe that "all Blue Lives Matter." And of course to complete the perfect storm is corrupt leadership and government from mayors and right up to the Trump Administration. The police unions lead by men such as Kroll appear to be in lockstep with Trump and his shaded racist views. Trump called Neo Nazi's and Klansmen very fine people during Charlottesville's uproar. Which no doubt is a dog whistle for other hate groups who endorse him under the guise of politics.

How much is being a good cop worth today, when unprovoked violence comes from the ones who are suppose to be better than the average person? Plus everywhere we look there is more breaking news about another black or hispanic person is thug jumped or killed for being born a suspect? Many of us can't see the good cops for a corrupt system that gives the green light to police unions which have a militant and pro-white agenda. We need men and women in leadership in every state and city to see us as equal and deserving of respect and justice. And America needs a government that doesn't give dog whistles to Klansmen, neo nazi's at their rallies or anywhere. Any person who can't understand what it means when we say "Black Lives Matter" should not be a cop or the president. 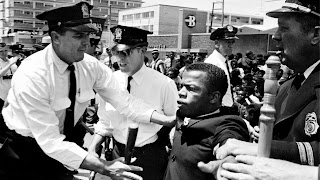