Every Breath You Take Part 1 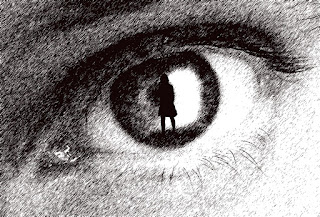 Every move you make
Every breath you take

Every bond you break
Every step you take
I'll be watching you.-Sting (C) 1983 A&M Records Ltd

This 1980's pop classic by The Police was considered an off beat love song with undertones of a guy who always had a woman on his mind. Maybe flattering for the times. but now it's evolved into something of a stalker anthem for a new generation. And while it great and even cool to remember the song, and make jokes about it's meaning, to live a life where you're forced to be on guard because of those who believe they have the right to have access to you in the military, college or the work place can shake you to your very core as a person.

In 1997 Monisha Rios was 17 years old when she took a military entry exam. Most of her life she had been told that her learning skills were sub-par compared to others, and that, in itself, affected her confidence and even self-esteem. She was very surprised to realize how well she did on the exam and began to receive calls from all the branches. It might have been the beginning of open doors in academia for her, but she also went through the maze of sexual harassment, and sexual assaults in the military and fighting for personal justice, as well as advocating for those who were being assaulted and marginalized by the military and VA.

Monisha chose to enlist in the Army, partly because the Army had been a family tradition for some years back; plus the idea to join the military was very humanitarian. But of course being a minor, she had to do some serious persuading with her mom that this was a good thing. During her senior year, Monisha was in the delayed entry program, and worked hard at becoming physically fit for boot camp. Ironically no recruiter told her the truth about the sexual harassment maze she'd go through, which started even before she made it to boot camp.

"We had to share a hotel room. ( females in same room, and males in different rooms) We said good bye to our families--- It was like a movie like "Porky's" almost acting like complete idiots except this was real life--- young guys walking in and out of rooms. They would come and sit on my bed--- try to touch me while I was trying to sleep." She would push back. "Hey we're shipping out tomorrow--- like they actually believed that going into the Army meant they were going to get laid or something." Recalling her experience, "That was pretty scary that first night."  -Monisha Rios


After getting on the bus and reaching their destination to Fort Jackson SC, the female recruits were briefed on the military's brand of training for sexual assault by putting the responsibility on the female recruits.  "We were trained not to smile, bat our eyes, cross our legs, don't laugh or look feminine. Don't do anything that will attract attention to you. We were literally codified by the female drill sergeants, who would make us do push ups if we crossed our legs." Apparently the military's belief was if a recruit didn't act like a woman, then it would deter unwanted attention from male recruits. Amazing that the military can give a soldier any command but not, "don't touch another female or male soldier."

Every Single Day, Every Word You Say...

In this integrated platoon although sleeping quarters were separated, both male and female soldiers

were encouraged to have limited but helpful interaction with each other. That standard seemed to be a moving target in Monisha's case with a male drill sergeant from another platoon. This drill instructor DS observed Private Rios showing another fellow private how to fill out a laundry slip in the corridor. Apparently the DS saw Rios as some sort of Delilah to this guy's Samson, or Esmeralda who was trying to charm and bewitch other male. She was made to remain in the corridor and lie on her back with her legs spread eagle much to her personal humiliation. While the male recruit was subjected to the typical drop to the ground and give me twenty or thirty with him yelling "what's wrong with you soldier? That female will just get you in trouble." While yelling the most misogynistic slurs at the young female recruit "You're nothing but a whore!--- you're mother was a prostitute!--- and you're in the Army to be a prostitute like your mother!!! and other things while laying in a sexual position. This specific drill sergeant seemed to enjoy harassing Rios and other women in the most sick and demeaning ways to let them know in his opinion women didn't belong in the Army. This was just just one instance. I know the military will play mind games with boot camp recruits to condition them in being soldiers, and it's not pleasant, but generally done to help them to think like soldiers. But in my opinion, this was total harassment disguised as military conditioning. The harassment continued in other places; in the chow hall where the Drill Sergeant sitting in Monisha's direct line of sight would remark, "Oh you know what you really want in your mouth..."  Do you have to guess what things like that does for someone's appetite?

Every Game You Play, Every Night You Stay

After enduring boot camp hell for 11 weeks, Private Rios then moved to technical training at Keesler
AFB, where the harassment seemed to turn to stalking when a male D.S. came into the female latrine while she was in the shower, standing on the other side of the thin curtain. Fortunately he was gone soon after that because of another unrelated incident.
Later at that same base a male Airman who Monisha considered to be something of a friend began making her feel uncomfortable. His talk went from casual things to sharing his rape fantasies. He told her how women really like it rough, and inspite of her refusal to hear anymore, he followed up the talk with attacking her from behind and leaving a set of painful teeth imprints in her arm, much to her shock.

"He bit me so hard that each tooth mark left a dark purplish blue bruise. They were darker than the rest of the bruises. He threatened to hurt me if “I got him in trouble”. Not a single person in that room did anything." -Monisha Rios

Of course feeling the intimidation from the large Airman, she decided to remain quiet and try to let the whole thing pass. But it wasn't to be so because one of her own platoon members saw the bite from the kink artist and insisted that she report him. Monisha then pointed her assailant out to her DS. Whatever punishment he received from the incident, this arm biting perp wasn't happy.  He planned his retaliation on her. With another male friend in tow, he wades into her formation yelling sort of foul obscenities at Rios without a thought. Fortunately her female Drill Sergeant apprehended him and his buddy, while members of Monisha's own platoon hustled her to safety. Shortly after, the bully was kicked off the base and maybe the military for good. But needless to say, this close call left the recruit shaken and afraid for her own safety.

The Air Force doctor who was already treating her for other injuries attended to the bite on her arm. One day he began counseling her on perhaps separating from the Army to avoid arm bites or something much worse.

"He told me things would not get any easier for me; that I would most likely be assaulted in worse ways; that rape was in my future. On one hand, he could recommend I be placed on permanent profile, which would limit my MOS options, but not the likelihood of being raped. Or, he could recommend a separation based on my injuries, and significantly reduce my chances of being raped while serving my country. While I deliberated over the next few weeks, I thought of how terrified I felt, how depressed I’d become, how I’d washed out of classes, how unsafe and unprotected I really was in this environment. I thought of what might happen to me if I stayed in. I hadn’t even been in for a year and I did not want to return home as a failure for not handling Army life as a woman. I still struggle with that (internalized oppression). The overwhelming fear and terror outweighed my desire for an army career."
-Monisha Rios

Apparently at some point Monisha Rios began to realize that she was in an institution that had little
regard (if any) for women who wanted to serve. She was becoming broken psychologically with every breath she takes, and every move she makes.  The military institution she thought she was joining had become her enemy because she was the wrong gender. Next time her team mates may not be around to help her to avoid the inevitable. What a thing to have playing in your head both night and day.

Every Claim You Stake, I'll Be Watching

If she had second thoughts about getting out of the Army, they were squelched during her out-processing at Redstone Arsenal in Alabama, where she endured more sexualized psychological and physical oppression at the hands of a female captain who was one of the boys. Monisha recounts that it was like basic training all over again; this time with a woman leading the hatred brigade. It was like Boot Camp Hell The Sequel.


After standing up for herself she was retaliated against. Another hard lesson to learn was that other women in the military would throw her under the pay-back bus. A female Platoon Sergeant had to follow through on a cooked up  false accusation (by would-be rapists Monisha stood up to) and took  her aside to tell her she knew it was a lie. The Platoon Sergeant remarked to her that "it’s what you get for standing up for myself against the boys club" And of course this PS wasn't going to stick her neck out for Monisha and be retaliated against herself.
When her day to be discharged came there must have been relief mixed with a sense of failure to complete her commitment to the service. She thinks about it quite often as she fights to advocate for those who are also struggling with trauma brought on by sexual harassment and sexual assaults. This fight would take her to the step of another institution. The Veterans Administration.  Her story continues in 2 weeks.


Special thanks to: Monisha Rios for taking the time to make this interview possible. Looking forward to working with you again in the near future.

THE INVISIBLE WARRIOR REPORT: Every Breath You Take Part 2