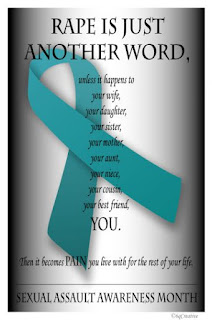 This is April, and among other things it is Sexual Assault Awareness month. Once again, we are asking you to grab a piece of teal and wear it to show your support for victims of Sexual Assault, Sexual Harassment, and domestic Violence. Although the proclamation comes from the White House, its roots go back as for as the 1970's and today adopted by National Coalition Against Sexual Assault. It started out as a one-week-in April focus and, of course, there is a need to continue to stay focused on the problem in civilian life and the Military.

The number of reported sexual assaults that occurred have gone up and not down since 2013, according to the DOD, on military bases and installations around the world. More than half the military victims in 2016, (68%) did not report sexually violent crimes, according to data from the annual Department of Defense report on sexual assault in 2017. As I have said before, when the media (both social and mainstream) turn the lights onto the problem, the right things are said, and it appears that the military will fix the problem. Many survivors punched hard with the documentary, The Invisible War. Never did we see anything like the stories being told by men and women of what they went through while trying to serve their country. Some of these survivors came to Washington DC to speak with senators and congressmen about their cases. They were flesh and blood Veterans attempting to make a change for those who would raise their hand and take the oath to serve and protect American and defend the Constitution. But of course there was some contrition, when the brass faced the Senate, but very little was changed to reverse the problem.

"The truth is that the scourge of sexual assault in the military remains status quo," Sen. Kirsten Gillibrand, D-New York, said about the 2017 Pentagon report. "(It) disappointingly shows a flat overall reporting rate and a retaliation rate against survivors that remains at an unacceptable 6 out of 10 for a third year in a row."

We need to realize this month that sexual assault crimes in the military are still a problem no matter what is going on in the world or what this White House is trying to distract us with.

A Monster Dressed In Fatigues

A young Army Specialist, Sarah Reyes, considered herself a church girl who had bad relationship experience before signing up and was determine to abstain from sex until marriage and put the Army first. In an interview with CNN she said that she loved her job, and her instincts had always prompted her to run toward danger, not away from it. "I lived for it, and I was good at it," she said of her time as an Army combat medic, which included a nine-month stint in Afghanistan.
The opposite seems true for Sarah now because she was sexual assaulted by someone whom she thought was trust worthy. A fellow soldier at a barracks party at Fort Stewart, Georgia. Sarah now calls him a monster who raped her dressed in fatigues. They both had been in the same platoon and  deployed over seas. So you would think a fellow soldier and a brother-in-arms wouldn't take advantage of her in this way.

It's the same old story of someone receiving very little to drink, but passing out because someone had 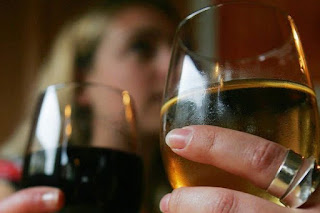 conspired to mix the drinks making their intended victim blackout drunk hard and fast.
Rapists in and out of the military are good at this because it causes memory gaps. As in Sarah's case, she had no idea what had happened to her.

Reyes told CNN that she did not feel like she drank too much but noted that she was "not making her own drinks" and "does not have much memory" of the night.

Although the timeline of the evening is still fuzzy at times, Reyes said she now recalls more about what occurred -- including feeling very tired during the party and lying in the bed of a male soldier.The realization that something beyond her initial memory of the night had occurred did not fully set in until the next day, when her friends asked if she had consented to everything that happened during the encounter. "That moment was like someone flipped on a light switch -- I realized I didn't want it all to happen," Reyes said. "My body went numb and I was crying. ... (I) felt like my world had ended and I couldn't figure out why."

What's so shocking was that the male soldier confessed to what he did to her, but the all-male investigation panel couldn't do anything because they don't have anything to prove beyond his confession. In other words the investigators wouldn't allow Reyes's attacker to incriminate himself because she couldn't remember if she said "No" to him. People who are looking to exonerate a rapist are now with the old, "Well, did you say 'No'" dodge. If a person is so out of it, how can he or she swear to anything or remember anything that was said? Of course this person wasn't found guilty of anything. He was allowed to return back to his duties. Reyes told CNN that it took her a long time to speak out and tell anyone what had happened, partly because the circumstances didn't feel straight forward in a military sense. And perhaps she's right in the sense that there is no one-size-fits-all situation that fits a standard of sexual assault. There is also apparently no flexibility in the military male culture to understand that rapists depend upon the military to make a case based on a sober victim, or at least one who can recall what happen. But even with that, the system will set up roadblocks which allow the perp to escape unscathed such as performance of duties and rank. They're no longer allowed to express feelings of a soldier's good conduct, but the bias still remains. The higher up the accused is in the chain of command, the harder it is to convict them.

The System of The Old

We've been here before. Survivors like Reyes have no advocates on the inside of this situation because the old way of handling sexual assault, sexual harassment and retaliation is baked into the cake. The mindset hasn't changed and so they are looking for the change of law which allows a victim/survivor to get help outside the chain of command. The Military Justice Improvement Act remains stymied by politicians who either fear that change would alter the military that they know, or see it as a feminist win against a total male dominated culture. The author is Democratic Senator Kirsten Gillibrand of New York, who sees the bill as giving military servicemen and servicewoman a hand up in respect to receiving an fair and unbiased sense of justice. It doesn't take away the Commander's authority or power.

The carefully crafted Military Justice Improvement Act is designed to professionalize how the military prosecutes serious crimes like sexual assault, and to remove the systemic fear that survivors of military sexual assault describe in deciding whether to report the crimes committed against them. Repeated testimony from survivors and former commanders says that the widespread reluctance on the part of survivors to come forward and report is due to the bias and inherent conflicts of interest posed by the military chain of command’s sole decision-making power over whether cases move forward to a trial.


At the beginning of the year, advocates including Col. Don Christensen, president of 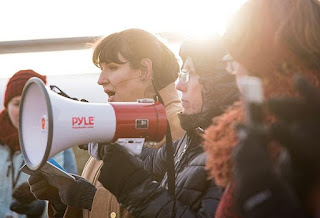 Protect Our Defenders; Monica Medina, a former special assistant to former Defense Secretary Leon Panetta; plus Heath Phillips and Nichole Bowen Crawford, survivors of military sexual trauma gathered at the Pentagon and spoke about how this system, which was supposed to be fixed, still remains broken. The DOD's reply was "The Department of Defense continuously works to eliminate sexual assault from the military, and we encourage service members to report all instances of sexual assault so we can provide support services and hold offenders accountable," spokesman Col. Rob Manning.

Sounds great to me. Except what's the magical number of sexual assaults which will cause you to fly into action? Some of these advocates speaking out, use to be in your ranks Military. Just saying. I would encourage those in the #MeToo movement to reach out to Veterans and active servicemen. Because it may have started in Hollywood, but it's about everybody.